YOUR PLACE OR MINECRAFT?

This witty web series follows the virtual lives of a handful academics playing Minecraft together. An online adventure of fun, smarts and drama. 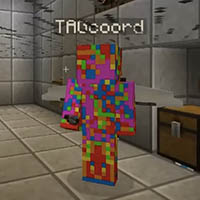 Your Place or Minecraft? is written and directed by Gina Hara, an award winning filmmaker and artist with a background in art & technology. She is interested in the experimental aspects and transmedial forms of visual culture. Gina is currently the creative director of the Technoculture, Art and Games Research Centre at Concordia University, while finishing her first feature film about women geeks. Gina had worked in different media with regard to film, video, new media, gaming and design.

The 'mLab server' is one of the most modded Minecraft servers in the world. But what makes it really special is that it is owned by academic games research centres of Concordia University where the players—students and professors—all work together in real life. Their real life friendships, objectives and conflicts result in fascinating, self-reflexive and sometimes explosive gameplay.

Your Place or Minecraft? has been made possible thanks to the support of TAG, IMMERSe, Bart Simon and Darren Wershler.

All images were shot in Minecraft, songs written and performed by Minecraft, Allison Cole and Pierson Browne.

Your Place or Minecraft? is not an official Minecraft product, it is not approved by or associated with Mojang.

Your Place or Minecraft? was created within Concordia University's research institute with the intentions of research and education.